We just added a bunch of new tattoos to Natan’s portfolio. You can feast your eyes on them by clicking right here. Below are a couple of our favorites. 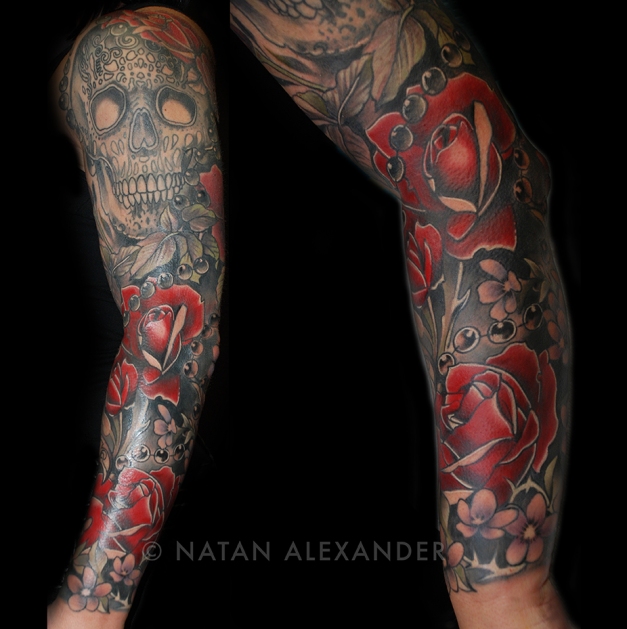 Renee has gotten many hours of work from Natan, and this sleeve is her largest piece.

Natan is no stranger to pagan tattoos, especially at his shop in Salem. 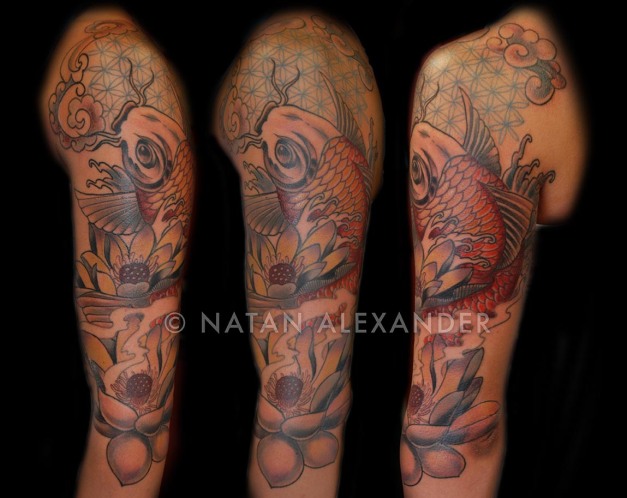 You can’t go wrong with a classic koi fish and some sacred geometry.

On Friday, Natan completed the second session of a phoenix half-sleeve on one of his traveling clients, Michael. He lives further down the east coast but has now flown to New England twice to have Natan work on his tattoo. Natan has tattooed people from all over the world, and it’s not uncommon for them to make the trip for multiple pieces.

Thanks Michael, we hope to see you for your next session soon!

In Progress: Mucha-Inspired Back Piece

Like any large tattoo, this back piece has been in progress for a while. Abbey came in armed with jellybeans for a long session on her Mucha-inspired back piece. Rumor has it that this tattoo may be finished by the end of summer, so keep checking back for updates!

As usual, Natan has a lot of in progress pieces happening. John, a Salem local and business owner, came in for his first session last week. The phoenix was a long outlining session, and he sat like a champ! Natan tattoos a lot of phoenixes, but this is the first one to cover an entire arm in a while. We’re looking forward to seeing this progress in future sessions. Of course, more pics will follow!

With the Boston Tattoo Convention less than six months away, Natan’s schedule is getting fuller. If you need to schedule an appointment with him to continue an existing piece or start something new, we recommend doing so as soon as you can! Give Witch City Ink a call at 978.744.9393, and we’ll get you in his calendar.

We showed you the first session of this Ganesh tattoo right here. It’s still not quite done, but below are the fine results of session number two. Stay tuned for more progress! 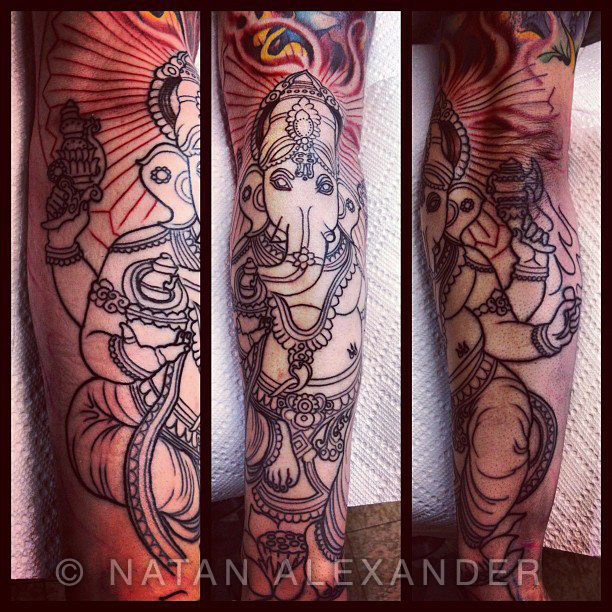 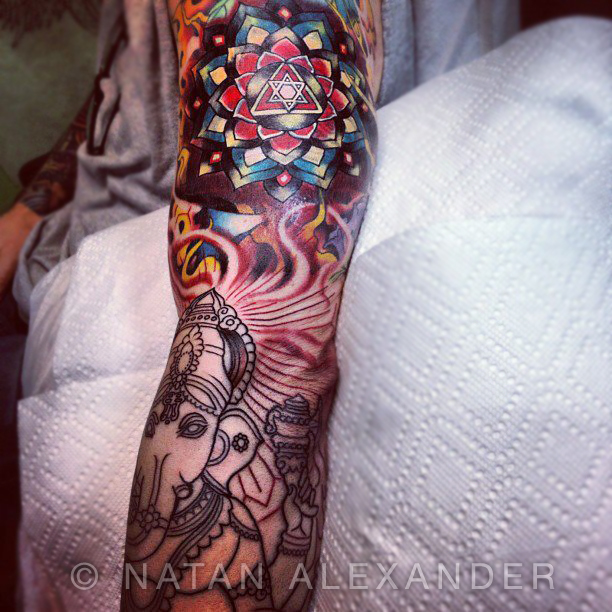 What was initially thought to be just the first session of a Ganesh forearm piece, turned into a solid seven hour session that included a coverup. See that Ganesh Yantra there? Before yesterday, there was some old tribal in its place. It was a long day, but both client and artist walked away happy. Thanks, Michael!

Natan has a couple of smaller openings available in December, both at Witch City Ink and Lightwave Tattoo. If you have an existing piece that you want to work on for a couple of hours, or want to get something small done, give the keeper of his schedule a call at 978.744.9393.

This sugar skull and marigold piece fits this client’s back perfectly. It took two sessions, and was finished up yesterday. Thanks, Sarah!

Here are a few smaller pieces, recently completed by Natan.

Firstly, a brightly colored lotus blossom and lettering. “Amor fati” is a Latin phrase loosely translating to “love of fate” or “love of one’s fate.”

Second, a Tibetan double dorje. In Tibetan the word dorje means “indestructible.” The dorje is a spiritual weapon used to banish non-truths and bring in the truth. The dorje is often used in a Tibetan Buddhist ritual, where it is twirled in order to bring in truth.

Third, which perhaps shouldn’t be categorized as a “smaller work,” is a bright shamrock surrounded by traditional elements (such as a clipper ship and swallow) in black and grey.

Natan has limited December availability before he sets off to Japan, and his January is already filling up quickly. If you would like to book an appointment with him, give Witch City Ink a call at 978.744.9393.

One look at Natan’s portfolio, and it’s obvious that he is heavily and humbly influenced by Asian (particularly Japanese) culture. One of his favorite subjects to tattoo? Dragons, of course. Here are some fun little tidbits from Wikipedia:

Japanese dragons (日本の竜 Nihon no ryū) are diverse legendary creatures in Japanese truth and folklore. The style of the dragon was heavily influenced by the Chinese dragon. Like these other Asian dragons, most Japanese ones are water deities associated with rainfall and bodies of water, and are typically depicted as large, wingless, serpentine creatures with clawed feet.

Fascinating stuff! The above photo, as well as the one below, are in-progress pieces that Natan has worked on recently. He’ll also be spending some time in Japan at the end of the year and going into January. Envious? We are too.

Happy Wednesday! We have a lot of recent works from Natan to show you, and we thought we’d start off with a nice little sleeve post of the flower persuasion. First up is a black and grey lily sleeve on Jodie, who quickly became one of our favorite clients. 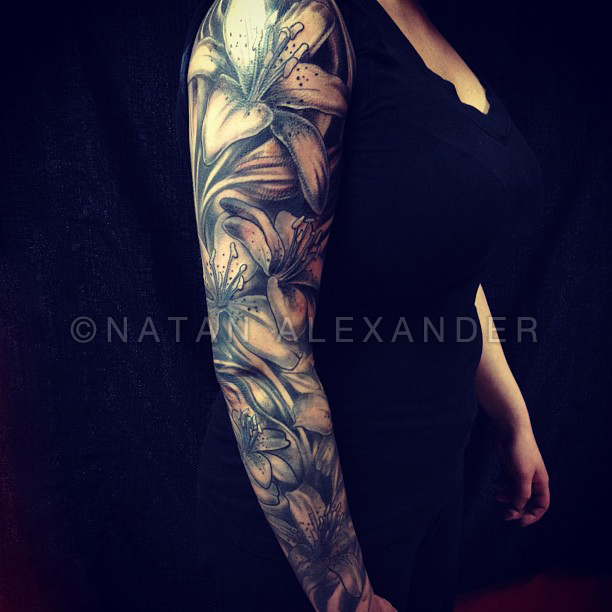 This next pic only shows a portion of this sleeve, which also consists of flowers, but is done quite differently than the above lilies. The colors are incredibly vivid — more so than this photo shows! 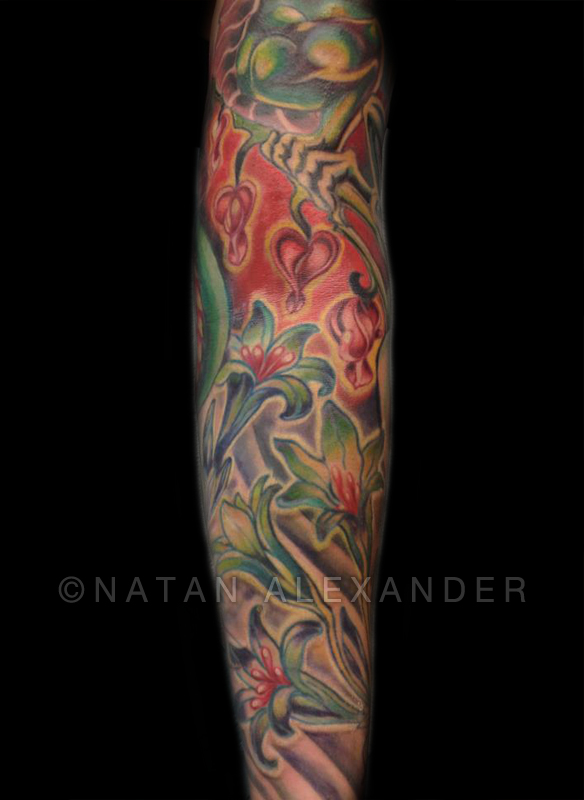 Moving away from the floral spectrum, one of Natan’s clients came in with the idea of wanting waves on his forearms. He was pretty excited about these — and so were we!

As usual, Natan’s schedule is filling up incredibly fast, so be sure to give Witch City Ink a call at 978.744.9393 if you’d like to make an appointment with him (even if you want to be tattooed by him at Lightwave — the keepers of his schedule are at Witch City!). As always, keep checking back here for more tattoo photos, travel news, and a little announcement about a customer appreciation party/art show at Lightwave!